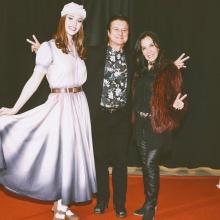 They were in Las Vegas earlier this week where they took in a performance of Love , the Cirque du Soleil show based on the music of The Beatles . Afterwards, they posed for a photo together with one of the performers.

Steve and Olivia met during the making of his most recent album, Traces , to get her approval for his recording of George's "I Need You," off the Help! album, on which he changed some of the lyrics.

On meeting with Olivia to get her blessing for his recording of George's song, he said this, "I went to her office and I played her the song and I was so nervous. Because, when you're in the George Harrison environment, you just feel him there. And, it's Olivia, you know. So she listens to it and then she quickly grabbed the remote and restarted it and I went, 'God I hope she loves it', you know. And she restarted it and got halfway through the second listen and said, 'George would have loved this version.' I got the blessing."

Many of the songs on Traces center around Perry's 2012 loss of his girlfriend, Dr. Kellie Nash . For comparison, this the original song from the Beatles: